An Episcopal parish in Rhode Island has come up with a new idea for a contact-less Ash Wednesday: instead of the usual imposition of ashes on the forehead, people can stop by and pick up a sealed plastic bag containing a business card with the usual formula (“Remember, man, that you are dust…”) on the obverse and a smudge of ashes in the form of a cross on the reverse.

It’s not exactly clear what one is supposed to do.  Are you supposed to apply the ash side to the forehead, like a “press-and-stick” kind of tattoo?  Or does one tape the card to one’s forehead?

Some call it off-beat and “innovative.”  Others are “reading the signs of the times.”

Its promoters focus on the positive. In a pandemic situation where churches have been largely closed down, people think COVID is a smart virus particularly virulent within church walls. Folks want to avoid physical contact; the method seems to respond to an “expectation” associated with the start of Lent.  Paradoxically, we want to bear a sign of our mortality that’s been sterilized, death’s sting overcome not by the mark of Christ (Rev. 7:3) but a tamper-proof hermetic seal.

Others ask whether it really reflects the worst of contemporary culture.  Is it “virtue signaling,” (esp. if one touts the card), which seems at variance with the usual Gospel for Ash Wednesday (Mt 6:1-6, 16-18).  Is it a concession to individualism: “do-it-yourself” ashes that marginalizes the ecclesial dimension of religion in general and repentance in particular?  Is it another triumph of “functionalism,” i.e., doing something, even if the form is bowdlerized in the process?  Does it also turn ashes into something of a folk ritual, an “expectation” we “do” on Ash Wednesday?

One pastor once observed he had better attendance on Ash Wednesday than Good Friday, noting in passing that “people show up when there are giveaways, like ashes and palms.” Has this Barrington, Rhode Island parish turned ashes into ecclesial takeaway?  After all, their approach last year – leaving ashes for people to stop in and self-impose – was called “Ashes to Go.”

There will, of course, be those who will read the Ash Wednesday Gospel and, in the name of Christian charity, tsk-tsk about those who still want to have any external/ecclesial contact, assuring us we should all just close our doors tight, forego the sacramental, and “pray to your Father in private.”

A Response Unhinged from Sacramental Anthrolopology

I recently heard that, since COVID long ago resulted in the draining of holy water stoups in Catholic churches but people want access to the sacramental, some parish has come up with the idea of non-collective contact by turning holy water into sacred steam: a vaporizer in front of which one can put one’s hand, moisten it, and then bless one’s self.  The Angelic Doctor never commented on whether “holy water” remains such in whatever physical state (liquid, solid, or gaseous) in which it’s supplied.

All this, of course, finds parallels early in the COVID crisis when some “pastoral theologians” (mostly in Europe) suggested prepackaged hosts for individual Communion, a sacrilege bishops happily suppressed.

One of the key insights of Dante’s Inferno was the justice in how punishment matched the sin: those lacking principles incessantly chase an eternally mobile flag, the souls who commit suicide are spiritually enclosed in trees (hanging being the usual method of self-killing) from which, after the Parousia, their bodies will hang rather than being reunited (“for it is not just that a man be given back what he freely threw away”), etc.  In that sense, it’s been observed that COVID is a particular apt disease for our gnostic, anti-body/anti-physical times: it has made us terrified of any contact with another physical human being.

We talk about the intersection of Church and culture.  These episodes epitomize where one can argue that the former is excessively accommodating to the latter, to the point that the Church is diminishing its own raison d’être. The Church is the gathering of the People of God, because we are saved in community.  We are saved body and soul—physically and spiritually—in and through the Church.

While efforts to “accommodate” like those mentioned above seem good, they diminish the spiritual dimension of the Church to a functional one.  The Church is not a bakery that “makes” ashes or the Bread of Life, distribution being merely logistical problem in search of takeaway or Spiritual Amazon.  Sacraments and sacramental are physical realities that communicate their efficacy through what they are, not simply what they remind us of or by simple contact.  Should we then stock boilers in old buildings with holy water so that sacred steam can spout out of old-fashioned radiators?

As we enter a second year under some form of COVID lockdown, we desperately need an ecclesiastical accounting of how the “de-physicalization” of religion – especially in high ecclesiastical traditions that have or pay lip service to sacramentality – need to repair the consequences of the Church’s diminished activity or even absolute shutdown.  If “spiritual” Communion is essentially the real thing, as some suggest, why bother going to Church?  If the Church gives us the raw materials (e.g., ashes) is there any difference between contactless sprinkling of ashes on the heads of those who step forward in the context of a church service versus those who self-apply them after picking up some milk and ashes on the way home?  There is – but we are not talking about it, which is letting this de-sacramentalization gain ground.

In the Catholic Gospel for the last Sunday before Lent this year (Mk 1:40-45), Jesus heals a leper.  It’s the first leper Jesus heals in that Gospel.  He’s in the process of forming His Apostolic band: imagine Peter, Andrew, James, and John’s collective shock at the event.  But the Gospel is clear: Jesus “moved with pity, stretched out His hand, [and] touched him” (Mk 1:41).  He didn’t business card him.  Later on, He didn’t vaporize His spittle and put it in a baggie (John 9:6).  To the best of my knowledge, no German historical exegete has yet concluded that St. Francis blew an air kiss to the Assisi leper. Either we regard these accounts as pious fervorinos inapplicable to our “scientific” age … or perhaps rethink some of the antiseptic regimens of the field hospital.

The views expressed herein are exclusively the author’s. 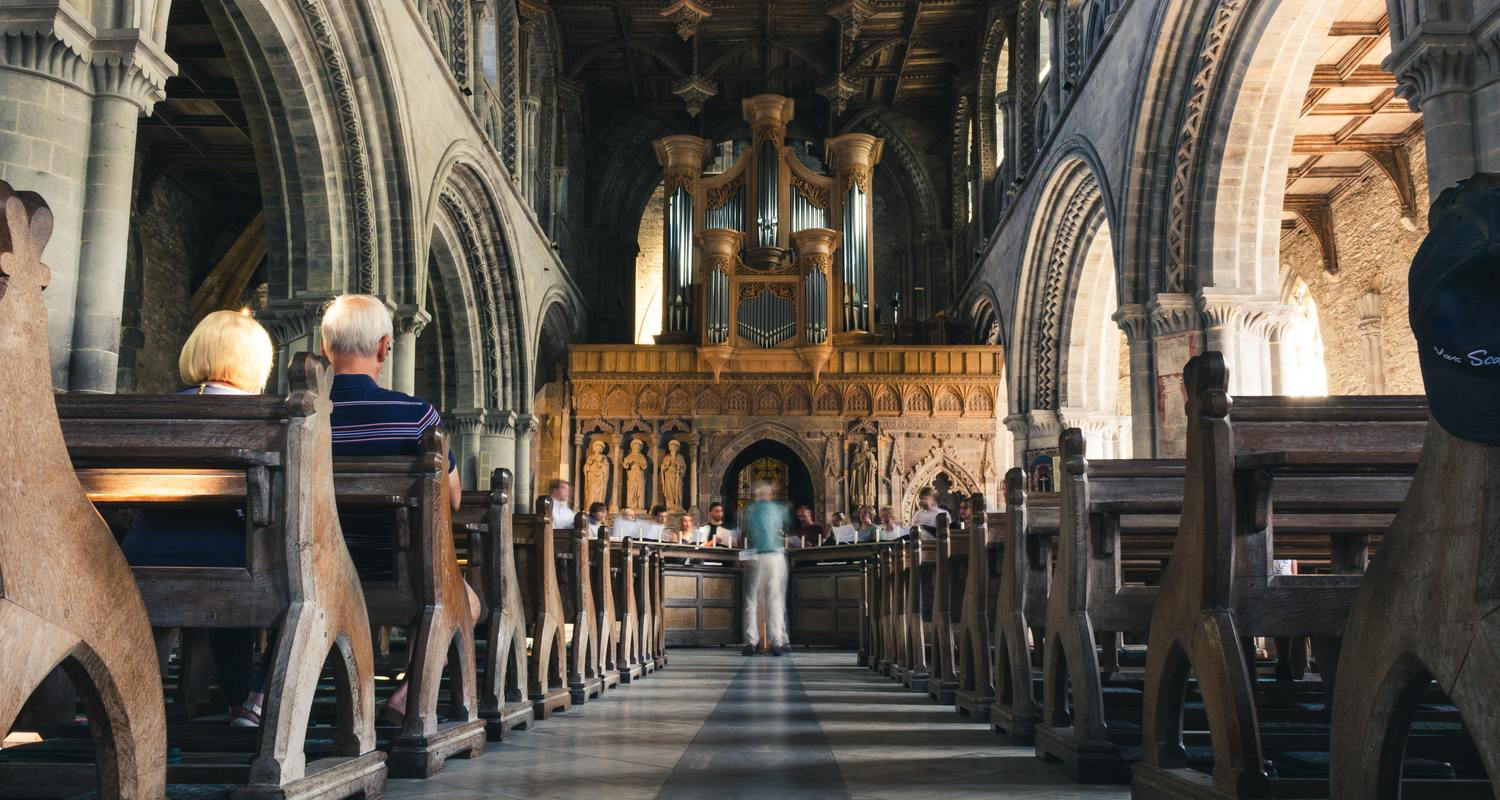 Just Don't Sing A New Song Unto the Lord