I hear many Catholics disenchanted with what they see as the “American project” of Catholicism—the identification of compatibility, to a more or less major degree, between Catholicism and what passes for the “liberalism” or “modernity” of which the U.S. is thought to be paradigmatic. While not sharing their certainty of conviction on this point, their imaginative and urgently felt calls for new modes of communal life invigorate and inspire me.

Reading Radically Catholic in the Age of Francis: An Anthology of Visions for the Future (ed. Daniel Schwindt; Solidarity Hall Press, 2014), then, has left me feeling quite alive. This anthology is accessible and digestible: the longest essay is a 16-page interview with Patrick Deneen, only a few feature footnotes, and few contributors are academics—more common are popular writers and bloggers. Radically Catholic is composed of four chapters arranged thematically on Conscience, Community, City, and Church, each containing six short essays. Regular Ethika Politika readers will recognize several names from the table of contents: Schwindt himself, Haines, Rocha, Crim, Deneen, Pecknold, Storck, Médaille, and Stoker Bruenig among others. 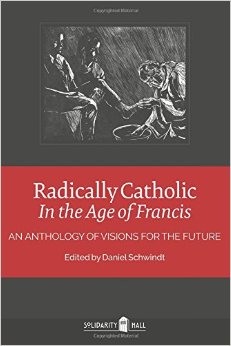 Elias Crim introduces the essays with the following question: “Do we [North Americans] also feel a momentous shift in the Church? The contributors to this collection would seem to say so.” Schwindt frames the book as a collective but varied response to this question: “What does one do with the negative space—the cultural void—in which we find ourselves?” Describing the book’s project as one of “reconstruction” and “reactionary character,” Schwindt has organized these calls for a return to the roots—hence “radical”—of orthodox Christian praxis and belief in modern America.

What has Pope Francis to do with any of this? While each writer differs in subject matter, state-in-life, and whatever constructive view(s) should occupy the present “negative space,” Schwindt sees them all “address[ing] their problems according to a common vector: and that vector is exemplified in the person of Pope Francis.” Taking upon itself the mantle of Francis and especially Evangelii Gaudium, Radically Catholic is nothing if not a reaction against what several of its contributors call the “American Project,” or simply “liberalism” or “modernity.” The essayists are disenchanted with American Catholic life and disturbed at what Deneen calls in his remarks “the changed relationship between America and Catholicism today.”

The essays share little by way of targeted prescription, and even differ openly in endorsements of rhetoric (Deneen and Schwindt on the term “radical,” for example), but reflect a shared conviction: that Catholic America today—finding itself adrift amid counterproductive associations (between orthodoxy and partisan identity), ideologies, and problematic self-understandings  (as structured by borrowed protestant, particularly Calvinist, American mores)—needs a dramatic “return to the roots” of the Gospel. This return is exemplified in the pontificate of Francis, whom Deneen calls the first “post-modern” and Médaille the “anti-modern” pope.

The book is a call to American Catholics to shed whatever false commitments impede their own encounters with Christ, and others’ encounters with the Gospel. The contributors, like Francis, want to dislodge ideological and political prisms of Catholic expression. Some identify as Republicans; others as Democrats; still others explicitly refuse to identify with either, as does Heather King in her essay, “Why I Avoid Both the Catholic Right and the Catholic Left.” All eschew being at ease in either of what Thomas Storck calls “two large cultural-political blocs.” As contributor Matthew Tan puts it:

The primacy of a transformative encounter between the sinner and God [...] should knock us out of our complacent association of Christianity with presumptions that we see as natural givens for the Christian life, whether those givens be the monarchy, the free market, baroque architecture, empire, conservatism and the like.


This soundbite fails to remind, however, that the Church’s presence in the world is inescapably historical-situational, and therefore inescapably political, cultural, and social. Even life as “radically” Catholic—life drawing its vital energies from the wellsprings of Sacred Tradition and the sacramental life of the Church—always remains grounded in the cultures in which the Church operates, and the Church must be responsive to those cultures. Essays such as King’s are only persuasive to the extent that they recognize and advance solutions consistent with a desire to transform culture, rather than work against it by attempting to transcend it, which is impossible. Storck aptly notes, “The Church very much exists in the world, and she cannot preach the Gospel without taking account of these varying historical circumstances in which she is placed.” The contributors for the most part respect this basic fact, and temper any edenic dreams of living lives devoid of political maneuvering and labelling. Sometimes they seem not to, writing instead as if they can live free of the Gospel being mediated culturally even to them.

True to the anthology’s stated purpose, the contributors each write simply and personally while advancing a community- or practice-based cause. Each chapter’s loose narrative unity with those before and after it, while frustrating and disorienting at times, makes the anthology good for bedtime reading or for tackling amid a tight schedule. And the complementarity and dynamism of the essays improve as the book progresses; the “City” and “Church” chapters are more focused, more evocative, and better written than the first two. My favorite essays all fall in the final three chapters: those by Grace Potts and Ricardo Simmons (Community); distributist elder statesmen Storck and Médaille (City); and Tan and Michael Sauter (Church).

The anthology’s greatest detriment is its writing, which is poorly edited to the point of distraction. From cover to cover, its essays contain glaring typos (“flourish” was misspelled three times in one essay, and simple words like “trying” in others); repeated use of possessive apostrophes instead of plural spellings; sentences seven lines long with one comma, or one sentence with ten commas; regular dissonance between singular and plural; and inconsistent punctuation and style. All of this distracts and detracts from the ideas at play.

Those ideas themselves, too, suffer many times from poor development and articulation. The contributors often write in sweeping, hugely overstated ways about the “isms” they’re reacting against. But a tendency to too broadly generalize other persons, thoughts, institutions, and ideals is itself ideological, as Francis and Médaille, in his essay on Evangelii Gaudium’s treatment of “traditionalism,” insist.

The book advocates for new and vibrant forms of solidarity and Christian community: caminos and co-ops, combating clericalism, and embracing the no-longer-Euro-centric Global Church of migrants. One can see the wisdom and merit of the book’s broad prescriptions even if one opposes—or is simply agnostic about—the contributors’ unifying vision of what they’re reacting against.

But as a collection of essays about shredding ideology in an effort to return to the roots of Catholicism it ironically indulges far too many sweeping claims and imprecise classifications to have its primary pointed critique (as opposed to prescriptions) taken seriously by those who don’t already share its animating convictions in that respect. King, for example, berates those who were upset at the Pope’s remarks to America magazine concerning “obsession” with certain doctrinal questions: “What’s going to happen to our positions as self-proclaimed ‘guardians of the faith?’ Who’s going to be in charge? Who’s going to spy?” This caricature simply won’t do in a collection about avoiding complacent assumptions.

The contributors also tend toward “local” approaches—under descriptors such as “incarnational praxis”—while seemingly forgetting that even as Christians are committing small acts of transformative love, Catholics are waging necessary real-time policy, legal, and cultural battles.

One essayist even laments that the American political project doesn’t seem interested in promoting virtue. That, of course, is false; the government voraciously imposes its understanding of virtues on its citizens, and punishes what it thinks vices. On the other hand, many contributors recognize this fact and lament it. But one gets the impression that these sell short the importance of trying to teach real virtues and values via law and policy, even as they decry the government using the same mechanisms to advance its pseudo-virtues, and treat that phenomenon as evidence for further disengagement with large-scale policy, legal, and political work.

In spite of these flaws, Radically Catholic in the Age of Francis is important reading for anyone invested on any side of the debate described by Deneen as “A Catholic Showdown Worth Watching.” The book’s visions for solidarity and community, even apart from its diagnosis of the American project, are imaginative, prophetic, and merit serious attention and creative engagement. Solidarity Hall Press has afforded a glimpse of Franciscan Catholicism that dwells in the heart of the Gospel while breathing new life into worn or wearying models of American life and culture.