Redeemed by Grace, Liberated for Truth

“The freedom to call things what they are and not feel inhibited by an overbearing force promoting untruths, felt liberating beyond words.” It was a freedom that in 2011 allowed Ramona Treviño to sleep soundly at night for the first time in months, a freedom rendered all the more cathartic by her years of suffering: emotionally absent parents, an abusive and broken marriage, a spiritually deadening employment stint with a pro-choice giant. But Treviño’s decision to quit her managerial position with Planned Parenthood and reject all its empty promises engulfed her in a freedom borne only from “the world we’ve claimed through faithfulness to Christ.”

Treviño, who has been called “the second Abby Johnson,” recounts her moving journey from Planned Parenthood facility manager to outspoken pro-life advocate in Tuesday’s latest release from Ignatius Press, Redeemed by Grace: A Catholic Woman’s Journey to Planned Parenthood and Back. A slim 145 pages and written in a straightforwardly personal style, Redeemed by Grace is a moving testimony that will galvanize pro-life efforts and move the hearts of readers who have endured any of the author’s many trials—and triumphs. 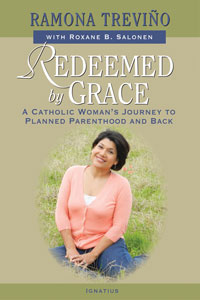 Treviño grew up in Trenton, roughly an hour north of Dallas, a daughter to an emotionally distant mother and an alcoholic father. Desperate for an escape from one particularly vitriolic parental fight, she climbed a ladder up to the roof of her house, praying to God to “please, please make this stop.” A flash of lightning illuminated the sky, convincing Treviño that God was near to her. She carried this conviction throughout her life, but it barely survived a troubled youth.

Physically maturing early, Treviño sought to fill the void of paternal love with “another kind of protective embrace.” A bright student, she was forced to drop out of high school when she became pregnant at 16, in order to appease her possessive boyfriend. In 1995, a week after her daughter Lorena was born, Treviño and her boyfriend wed in a civil ceremony, and she embarked upon a devastating seven-year trial of abuse and coercion.

After several suicide attempts, being raped by her husband, and learning that he was carrying on an affair, Treviño filed for divorce, requesting only the sole custody over her daughter. Her relief at finally being free of the marriage dissolved in the acidic mixture of old insecurities, which surfaced in the form of late nights out and even a one-night stand. But then she met Eugene, a handsome man whose dental braces only augmented his charm, and after a two-year courtship they were married in the Catholic Church in 2006.

Two years and several jobs later, Treviño was dissatisfied. When a friend called and encouraged her to apply to a local Planned Parenthood facility, Treviño was eager to help. “I yearned to help others in a more direct way,” she writes, “especially those in situations similar to what I had experienced as a young mother.” Offered a manager position at a referral-only clinic in nearby Sherman, Treviño took it. And while her first abortion referral pricked her conscience, she “tucked it away”: “Like Pontius Pilate, I was just fine with washing my hands of that first abortion referral and all those that would follow,” she writes of her initial qualms. Practical concerns, including the imperative to financially provide for her now-growing family and her success as a manager, delayed her reckoning with Planned Parenthood. But “disturbing connections” continued to unfold before her eyes.

Growing up being what she acknowledges some would call a “cultural Catholic,” Treviño attended Mass intermittently, praying regularly to God for guidance and embracing the Church’s teaching on abortion. On contraception, though, she “discounted” the Church’s teaching, “hoping somehow that it was the one area in which the Church was wrong.” Her personal contraceptive use further kept the scales over her eyes, only to be removed by the Pauline experience of listening to a Catholic radio program’s discussion of contraceptives and abortifacients. The connection jarred her; an irresolvable tension had arisen: “I had never before stumbled upon something that would compromise my moral convictions so directly,” she writes. “I couldn’t accept contraception as a grave evil when my job required me to accept it as a solution.”

To her credit, Treviño made the courageous decision. Making her first Confession since her marriage to Eugene and deciding to quit contraceptives herself, she began to connect the dots between contraception and troubled situations like her own adolescence. Speaking about sex education to young women in a local detention center, Treviño broke from her corporate-prepared script and realized that “birth control was not the solution to their problems at all.” While she “still wanted very much to believe that Planned Parenthood existed to help people,” doubts grew. “Something was missing from Planned Parenthood’s worldview.”

Several incidents later—she was informed at a briefing about Lila Rose’s Live Action sting that attendees “[weren't] here to discuss” how to avoid complicity in illegal and unsafe recommendations, and another supervisor forbade her from referring clients to the nearby, free Pregnancy Care Center—Treviño was ready to get out. With the image of facing Christ the Judge and his demand for an account of her life ever before her, Treviño introduced herself to the pro-life contingent that had taken to praying outside her clinic. After a powerful 2011 Lent and a decisive Divine Mercy Sunday experience, she had the impetus to cut ties fully: She resigned on May 6, 2011, and enjoyed that first night of good sleep in months. As she embedded herself more fully in the local pro-life community, a new life of joy and peace blossomed, and she discovered a calling to public ministry.

Treviño’s story is a Pauline microcosm, an internal struggle between a love of truth—“I had to ask the questions and to go wherever they led me, whether I liked the answers or not”—and the reality of human weakness: “My interior desire of wanting to do the right thing had seemed in continual conflict with my exterior life.” A 30-minute daily commute was her road to Damascus, and Catholic radio and powerful liturgical experiences were her blinding lights. Prayer was the medium of her existential transformation: “By being bent at the knees, I would more easily be able to receive the truths necessary to move through the next steps.”

Her story is also a poignant example of vocational fidelity and a willingness to be open to the truth. Always pro-life where abortion was concerned, Treviño resisted connecting the dots between her employment and abortions because her clinic itself didn’t perform them. Once she saw the connection, which she describes as a "paradigm shift," her external journey began to mirror her internal movement. And through it all, she walked with God: “There wasn’t a time, ever, that God had failed me. But I had failed myself by allowing fear to rule my life.”

The book’s last two chapters, epilogue, and addendum read post-climactically, as if clarificatory afterthoughts; the compelling narrative concludes in Chapter 16. And Treviño’s journey, while inspiring, is the less dramatic for her consistent anti-abortion stance.

But the sorrows of Treviño’s early life, her internal struggle during her three years at Planned Parenthood, her inspiring witness to faith in God, the support of the 40 Days for Life campaign and other Dallas-area pro-life groups, and the ecclesial backdrop surrounding it all make Redeemed by Grace an uplifting and heartwarming story well worth its three or four hour read. As Ash Wednesday approaches, Treviño’s penitential journey, which culminated in Lent and Easter four years ago, should motivate our own conversions of heart and vision.