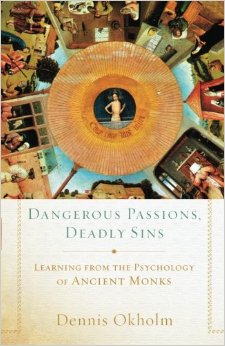 In the first chapter of his new book on the 7 deadly sins, Dangerous Passions, Deadly Sins: The Psychology of Ancient Monks, Dennis Okholm, professor of theology at Azuza Pacific and an Anglican priest, makes the goal of the book clear:

[W]hat I hope to accomplish in this book is twofold. First, I intend to bring forward the insights of early church monks in order to offer what one might call a truly Christian psychology rather than the more typical approach that begins with the template of contemporary understanding from the social science and then attempts to insert Christian concepts to make them fit the alien structure.

Second, I intend to make a bit of an apologetic case for the priority of this Christian psychology over against the presumption of moderns that we are the first to understand the etiology and treatment of the disorders and unregulated passions that will be discussed. And this also serves the purpose of demonstrating that in many cases what we do understand and deal with in the realm of psychology today (such as in the case of eating disorders or depression) was insightfully handled by deeply thoughtful Christian psychologists 1500 years ago (such as in the case of gluttony or sloth) … There is simply much wisdom from these early Christian writings for our spiritual and psychological health today.
By this standard, the book succeeds. What may make this book unique compared to other treatments of the 7 deadly sins is Okholm’s facility in bringing the insights of ancient Christian spirituality into dialogue with modern psychology. While the introductory remark above might give the impression that he simply tries to smash the square peg of a modern social science into the round hole of ancient theology—the opposite error to what he seeks to avoid (attempting to “insert Christian concepts” into the framework of modern psychology)—he actually does an excellent job walking a middle path between confirmation bias and compromise.

I considered majoring in psychology myself at one time (years ago now), and I would affirm Okholm’s basic conviction: In the spiritual writings of the Church, there is a rich and nuanced psychology waiting to be rediscovered and investigated from the Church fathers and others of both East and West.

But I could anticipate misgivings from psychologists along the following lines: Isn’t such a comparison a category confusion? The methods and aims of modern science are distinct from religious spirituality, after all. However, with an ongoing controversy over research methods and replication in psychology, a history of drawing from the spirituality and philosophy of Eastern religions, and increased interest in spiritual practices (such as mindfulness) among neuroscientists and others, the suggestion that perhaps the Christian spiritual tradition has something to offer modern psychology as well—even if only as inspiration for research questions then to be scientifically tested—ought not to be very controversial. That said, Dangerous Passions, Deadly Sins would be a great place to start just such an inquiry.

Rather than trying to synthesize the whole of Church Tradition, Okholm singles out three (really four) figures: Evagrius of Pontus, St. John Cassian, and Pope St. Gregory the Great. I say four, because he also draws extensively from the Angelic Doctor, Thomas Aquinas, as well. He thus offers an excellent East/West, ancient/medieval balance. Evagrius (d. 399) was hugely influential on Eastern Christian spirituality as some of his works, along with some abridged Greek translations of St. John Cassian, are featured in the Philokalia. Cassian (d. 435), for his part, wrote in Latin and lived in the West but came from and spent considerable time in the East, notably visiting and conferencing with the great ascetics of the Egyptian desert. Pope St. Gregory the Great (d. 604), the first monastic pope, spent the years 579-585 as Pope Pelagius II’s apocrisiarius to the imperial court in Constantinople. He is commemorated in the East as the author of the Liturgy of Presanctified Gifts (under the name St. Gregory Dialogos), and he is, of course, known in the West for his liturgical reforms, social activism, and asceticism. Thomas Aquinas (d. 1274), I presume, needs no introduction for readers here. In many ways (for better or worse), he is often considered the quintessential Western theologian.

In each chapter, Okholm begins by arguing for the relevance of each topic to modern life and then explores the Christian spiritual tradition through these four writers inter alia. After letting them have their say (and noting discrepancies between them), he then brings them into dialogue with research from modern psychology, relevant to each deadly sin. He often finds significant concurrence between the two but also helpfully points out ways in which the Christian spiritual tradition may have more to offer—or even conflict with—the state of the question in psychology today. He is not entirely uncritical of either the ancient tradition he champions or the modern science he hopes to influence.

For example, in his chapter on anger he ends with a note on abusive relationships:

What should we do about extreme cases, particularly those involving abuse? This issue comes home to roost when we read in Cassian’s conference on friendship that we are to preserve tranquility of heart no matter what evil transpires, not only to keep ourselves from the anger that disturbs us, “but also, by submitting to their injuries, compel those, who are disturbed by their own fault, to become calm, when they have had their fill of blows; and so overcome their rage by our gentleness.” This sometimes works, as it did in my high school experience when Rocky (his real name!) hit me in the left jaw (that still pops to this day) and later apologized in public because I had not retaliated. But rage is not often overcome by gentleness when there is a case of spousal abuse, for instance. Cassian is to be commended for trying to translate Romans 12:21 into our lives, and it ought to give the Anabaptist quadrant of our Christian sensibilities some hope. In a sense Cassian certainly is correct when he also says that, “in general he plays a stronger part who subjects his own will to his brother’s, than he who is found to be the more pertinacious in defending and clinging to his own decisions,” because the latter must be pampered and petted. And only the strong can bear and restore the health of the weak (after Gal. 6:2). But what if the weak one does not come around?


Okholm submits that while “[p]erhaps Cassian would admit that the same rules do not apply when the friendship of like-minded individuals who seek virtue breaks down.” Yet, he goes on to say, “This requires further reflection, and perhaps same-gender monastic communities are not the best source of wisdom here.” I would offer that St. Ambrose’s distinction between ordinary and perfect duties of the Christian life, comparable to the Eastern distinction, noted by Richard Sorabji, between apatheia (which Okholm explores) and metriopatheia (which Okholm overlooks), could help guide translation of such practices from the monastic setting of these ancient writers to the everyday setting of Okholm’s readers.

My one criticism of the book would be that, e.g. in the chapter on avarice, Okholm does not apply his same careful method to modern economics as he does to modern psychology. Instead, he more or less uncritically accepts characterizations of American capitalism from modern sociologists and philosophers, without also dialoguing with actual economists and without exploring the same questions (e.g. business, advertising, production, consumption, exchange) from a traditional Christian perspective. I would not discount the insights of sociologists on these questions, but neither should one neglect the insights of economists either, so long as one is going to comment on economic systems and contexts as Okholm does.

That one flaw is minor, however, and does not detract from the value of the book. For an accessible, but more than introductory, treatment of the seven deadly sins (and, thankfully, their cures), I highly recommend Dangerous Passions, Deadly Sins.