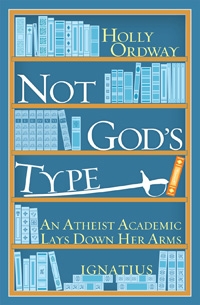 Holly Ordway’s recent release from Ignatius Press is a delightful and searingly introspective account of the author’s moving journey from unbelief, to profession of the lordship of Christ, to—for the first time in this updated edition of Ordway’s 2010 conversion account—her Roman homecoming as a Catholic.

In Not God’s Type: An Atheist Academic Lays Down Her Arms, Ordway expands on her popularly-received first edition, Not God’s Type: A Rational Academic Finds a Radical Faith, bolstering her more recent release with over four years’ worth of additional journeying. She infuses her latest account with anecdotes and details from her early youth and young adult life, a much more robust account of how Christian literature—particularly the works of Tolkien, C. S. Lewis, Chesterton, and Gerard Manley Hopkins—impacted and guided her conversion experience, and how her fencing career integrated with her growth in Christian discipleship.

A slim 187 pages (featuring 27 chapters and 7 “interludes,” none of which are longer than 10 pages) and written in the light and fluid prose befitting a former English professor, Not God’s Type is a quick and uplifting read, and eminently readable. Ordway opens with two quotes—one by John Henry Newman and one by Lewis—about “laying down one’s arms” before the sovereign Lord, thus situating the book’s title and its most persistent thematic element within the context not only of conversion from unbelief to belief, but of continual transformation of imagination and heart. Indeed, imagination plays a major role in Ordway’s conversion because it is an integral aspect of the Christian vision itself; each chapter opens with a snippet from a Christian poem or literary work. As she attests in the preface:

As I became increasingly involved in apologetics, I also recognized the importance of imagination as both the catalyst and the foundation of my rational exploration of the Faith … We need an appreciation of the way reason and imagination interact, and the way that meaning is wrestled with and formed over the long term (xv – xvi).


“This is the account of a glorious defeat,” Ordway writes in Chapter 1; not “a story of what I was clever enough to do, but rather of what I was weak enough to have done to me and for me.” This characteristic humility suffuses the book and imbues it with an authenticity that never borders on kitschy. In fact, the honesty with which Ordway recounts her atheist years, beginning in Chapter 2, makes vividly accessible the dark fruits of atheism. While she recalls herself thinking that “life inside the fortress of atheism was good” and that she “had a worldview that felt perfectly satisfactory,” Ordway also acknowledges in retrospect that “atheism, when consistently lived out, leads to self-deception or despair.”

J. Budziszewski has written that “the reason it is so difficult to argue with an atheist … is that he isn't being honest with himself.” If Ordway grants her own despair over the apparent meaninglessness of an atheistic world, she is clarion clear about the one uncompromising commitment of her atheism: a steadfast commitment to aligning her beliefs with what she believed to be true. Even in her atheism, she could “take a certain grim satisfaction in facing the facts” of the existential “darkness”—a word used often in the book—that atheism entails. “I wanted to know, and live by, the truth—no matter what,” Ordway writes; and yet, “my atheism was eating into my heart like acid.”

In the midst of her “fortress of atheism,” however, agents of unseen grace were sowing the seeds of the Christian vision. “A love of reading was the very best gift of my childhood,” Ordway writes, and encountering the enchanted worlds of Narnia and Middle-Earth unlocked for her a vision of reality that was, as she writes of Gerard Manley Hopkins’s poetry, “integrated because it was sacramental.” Together, these men of Catholic imagination and sensibility—Hopkins, Lewis, Tolkien—began their silent assault on Ordway’s fortress of atheism. Tolkien in particular—on whom Ordway wrote her doctoral dissertation—captured her imagination: “God’s grace was beginning to shine out from Tolkien’s works, illuminating my godless imagination with a Christian vision.”

In her “thirty-first year,” something began to change in Ordway. The seeds of grace that had rested dormant in her soul began to sprout, “like tree roots that slowly grow below sterile pavement, until one day the cement cracks and green shoots push up between the fractured bits of stone.” “The hook had been set long since," Ordway writes, borrowing from Chesterton, “and now the thread began to be drawn in.” Her experience teaching Christian poetry at a California college awakened in Ordway the desire to explore the realities that animated so much of the texts she so dearly loved. She turned to her fencing coach, a Christian named Josh, whose guidance and conversation for the next two dozen chapters will propel Ordway toward full-fledged belief.

The meat of the book concerns Ordway’s intellectual investigation of fundamental Christian claims. Did there exist a First Mover, a personal Creator through whose agency all things came into being from nothing? The evidence, as Ordway saw it, indicated ‘yes.’ And so forth for a host of claims that Ordway previously would have dismissed with nary a second thought. The fortress begins to crumble, largely thanks to those literary conduits of grace: Chesterton’s aesthetic sense, Lewis’s apologetic verve, always the poetry of Hopkins and the literature of Tolkien; seeds sown in silence, bearing good fruit in due season. Ordway’s fencing career itself, which in addition to serving as the sphere in which her friendship with Josh occurs, became an occasion for introspection and investigation. With the askesis of a disciplined athlete and academic scholar, Ordway’s search for truth, which she never subordinated to affective or other hesitations, led her to a gradual acceptance of the existence of the classical theistic God; the historicity of the resurrection of Jesus (with a helping hand from N. T. Wright); and finally, via a cathartic dream, to the full-fledged acceptance of Christ’s lordship in her own life. Just as importantly, in the midst of all her investigation, Ordway discovered perhaps the most shocking truth of all: The Christian faith is radically answerable to, and the conclusion of, right reason—because it is a faith in the divine Logos made man.

The book's final several chapters, in which Ordway details her movement from general evangelicalism to high Anglicanism to confirmation in the Catholic Church, read more as a flowering or crowning of her journey of faith, rather than an anticlimactic recess in light of her “conversion in the garden” (or rather, a profession of faith in a courtyard). In the end, Ordway finds a home in the “great patient quiet presence of the Church,” assenting in obedience to the Church toward which “reason and imagination pointed [her] in one direction.”

Every genre has its limitations, and Ordway’s recounting of how she intellectually received and responded to the claims of Wright, Peter Kreeft, and others is only summary; as such, it will disappoint both the atheist and the Christian looking to her for some kind of conclusive intellectual vantage point. Her story is not meant to be an apologetic itself, though Ordway now teaches cultural apologetics and the book’s suggestive title invites Christian celebration of the symphony of faith and reason.

Yet Ordway’s book is more than merely hortatory. It is a beautiful account of the courtship of the living God, a person to be known more so than a theory to be investigated. Ordway catches herself by surprise in the book’s latter chapters by realizing that while she “tested” God as a hypothesis, he engulfed her with his Holy Spirit, emboldening her to make not a leap, but a joyful affirmation of faith in the God who is nearer to her than she is to herself.

Ordway has produced a gem of a testament to the the dark numbness of atheism, the beauty of Christian literature and imagery, the virtue of undeflected passion for truth, the value of personal witness and apologetic (in the form of her coach, Josh), and the love of a God who, with a twitch upon the thread, infuses grace into the most formidable of graceless places.

In a sense, the title of the book, while endearing, is misleading; God is Ordway’s type, because everyone is God’s type.