In her recent review at Public Discourse of Yuval Levin’s The Great Debate: Edmund Burke, Thomas Paine, and the Birth of Right and Left, Elizabeth Corey makes the following assertion: “With some notable exceptions, most people who call themselves conservative in the present day have little sense of what it might mean to adopt gratitude and appreciation as a mode of orientation toward our experience.”

Rather than quibble with the details of this claim, I here would like to reflect on her challenge: what would a vision of society and human experience shaped by “gratitude and appreciation” actually look like? Drawing from the work of St. John Cassian and St. Maximus the Confessor, I argue that adopting thankfulness as one’s orientation toward human experience and history requires a hermeneutic grounded in virtue and asceticism, open to both societal reform and moral progress.

For Corey, at least, the orientation she has in mind seems to look a lot like Edmund Burke as understood by Yuval Levin. She writes,

Burke … focused on a different kind of beginning for human beings [than Paine]: that each person is born at a specific time, in a particular place, to a family of people with whom he or she did not choose to associate. All of this establishes the givenness of the human condition, the inherited character of so much in human life, and the limitations (sometimes welcome) of the choices open to us. Burke emphatically did not see these particularities as hindrances waiting to be eradicated in the name of universal equality. Instead, they were the constituents of a full, rich human life. We might simplify this position as an exhortation to be thankful for what one has before seeking what one does not. “Reform, Burke thought, ought to be implemented slowly and by degrees, on the solid foundation of past experience.”

This can be read in two ways, however. On the one hand, there is the danger of falling into an argumentum ad antiquitatem fallacy, tautologically presuming that all that is older is better and right simply because it is older. All reform, then, would be a matter of restoring a now defunct society to its once paradisiacal past. Such a position is susceptible to the typical objections regarding slavery, for example, as well as charges of confusing the concrete (history, human experience) with the ideal.

The second way to read it would be that past experience teaches us which old things deserve to be abandoned while also preventing us from repeating the mistakes of the past. It is difficult to see how this could be called “conservative,” however, assuming that being conservative is one’s desire in the first place. For example, a liberal like Lord Acton, an admirer of Burke and himself a critic of the French Revolution, would certainly affirm such a perspective. “History,” he wrote, “is not a master but a teacher. It is full of evil. It is addressed to free men who choose among its examples. Like experimental science—in which unsuccessful experiments prepare the way for discovery.”

Part of the problem is that the present-day, American dichotomy of liberal and conservative cannot accurately be read into the past: Acton refers to Burke, in fact, as both “the first of liberals [and] the first of conservatives.” Notably, it is precisely Burke’s appreciation for history that earns him the latter description from Acton, but that does not change the fact that he does not see the two terms as incompatible. “Liberal” clearly was not necessarily synonymous with “progressive,” not in the style of Rousseau, at least.

Further, and more to the point, it is difficult to see how this reading is necessarily characterized as one of “gratitude and appreciation.” “Historical-critical”—to borrow a term from biblical interpretation—would be far more apt. Yet I do not think Corey is wrong about the importance of thankfulness. I just think that if anyone’s goal—“conservative” or otherwise—is to adopt gratitude as “a mode of orientation toward our experience,” we must examine the nature of thanksgiving in the first place, for not every aspect of our experience merits appreciation.

In order to (briefly) do that, I here enlist the help of a few Church fathers. In St. John Cassian’s Conferences, he ascribes the following teaching to one Abba Isaac of the Egyptian desert: “The fourth kind [of prayer], thanksgiving, is when the mind recollects what God has done or is doing, or looks forward to the good which he has prepared for those that love him, and so offers its gratitude in an indescribable transport of spirit.” Abba Isaac links these four forms of prayer with four basic “affective states”: “The same person according to his diversity of affective states will use prayers of repentance or offering or intercession or thanksgiving.” In particular, thanksgiving is the proper response to true joy.

But what is this joy? It is clear from elsewhere that the four affective states Abba Isaac has in mind are a baptized version of the Stoic doctrine of good passions (eupatheia). The Stoics believed that passions involved conscious judgments, thus understanding them more as emotional habits than emotions per se.

To the Stoics, there were four basic passions, all of which ought to be avoided: pleasure, desire, fear, and grief. Pleasure was an irrational judgment about a present good; desire, a future good; fear, a future evil; and grief, a present evil.

Nevertheless, the dispassion (apatheia) that the Stoics advocated was not an emotionless state. They also acknowledged three corresponding rational or good passions that resulted from proper judgments regarding what is truly good (virtue) and what is truly evil (vice). They did not acknowledge a good form of grief, since they did not think the presence of vice could ever be regarded as good.

The ancient Jewish philosopher Philo of Alexandria, however, adopted and modified this scheme, introducing a good form of grief, viz. compunction, which leads people to repentance. Early Christians followed him in this (cf. 2 Corinthians 7:9-11).

The passions … become good in those who are spiritually earnest once they have wisely separated them from corporeal objects and used them to gain possession of heavenly things. For instance, they can turn desire [epithemia] into the appetitive movement of the mind’s longing for divine things, or pleasure [hedone] into the unadulterated joy of the mind when enticed toward divine gifts, or fear [phobos] into cautious concern for immanent punishment of sins committed, or grief [lype] into corrective repentance of a present evil. 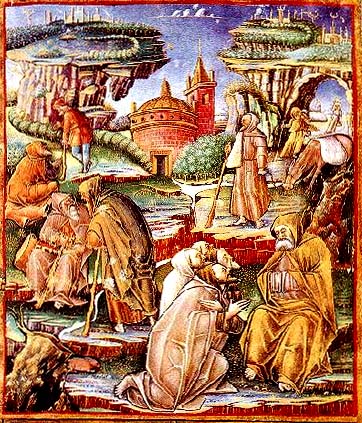 Understood in this way, the thanksgiving Abba Isaac describes is the proper, prayerful response to “the unadulterated joy of the mind when enticed toward divine gifts.” Now perhaps it is a bit of a jump for me to then move to gratitude in general, but I would suggest something along these lines is helpful and accurate, especially considering that “divine gifts” would most certainly include, if not primarily be, all that is virtuous or divine.

We may think of gratitude, then, as an appreciation of the joy that uniquely comes from what is virtuous and the recognition of “what God has done or is doing.” Now we have a hermeneutic for our experience, grounded in the God-given “‘eucharistic’ function of man,” to borrow from Fr. Alexander Schmemann. It is not enough to simply appreciate what is given. One must submit what is given to the standard of the Good, be thankful for it to the extent that it measures up, and be critical of it to the extent that it does not. The goal is ultimately transformative: In thanksgiving we offer up to God the good things he has given to us and receive them back transfigured by his grace.

This requires, however, a great amount of insight into what, in fact, the Good truly is. The development of such moral perception requires the ascetic practices that purge away our (bad) passions and turn our minds “toward divine gifts,” “from corporeal objects” to “possession of heavenly things.” The realization of our own inadequacy in this regard—for “all have sinned” (Romans 3:23)—ought to be a great source of humility.

Understanding our epistemological poverty in this way gives reason to pause at the idea that any given aspect of human experience, past or present, is easily disposed of or yet, for that matter, without flaw. We may call this conservative, but the mandate to look forward to and rejoice in the good things of the future also requires openness to reform and moral progress. For reform, properly established “on the solid foundation of past experience,” must also be unto something better that is yet to come and deserves our appreciation as well.